BACK TO NEWSROOM
Press Releases I Wednesday, March 17, 2021

Baby With Abnormal Position Of Heart and Organs Receives a New Lease of Life After Surgery at Aster Medcity. 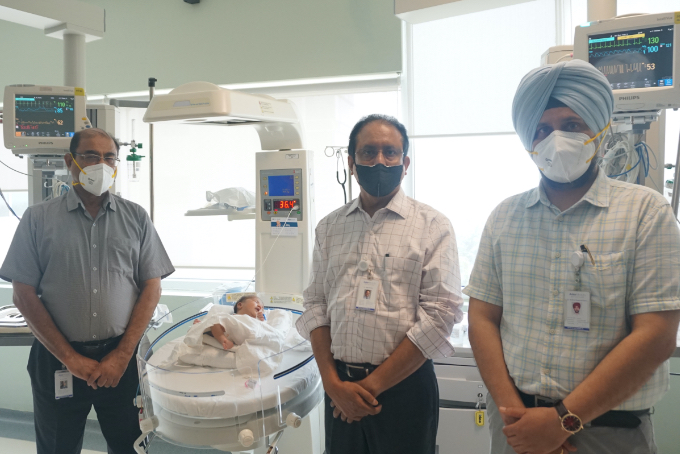 One-day-old baby with abnormal position of heart, other internal organs and low heart rate receives a new lease of life after surgery at Aster Medcity...

Kerala, 17 March, 2021: A one-day-old baby boy with abnormal positioning of heart and other internal organs with low heart beat rate has received a new lease of life after doctors at Aster Medcity successfully implanted pacemaker. The newborn was brought to Aster Medcity from a hospital in Palakkad, immediately after birth with complex congenital heart disease.

On arrival, the patient had a heart rate of just 40 beats per minute and mild bluish discoloration of the lips, according to the hospital authorities. He was immediately taken to the NICU, where the Neonatal team led by Dr. Jose Paul and Dr. Rajasree treated him with IV fluids. Pediatric Cardiologist Dr. Amitoz Singh Baidwan, found the child is having a complex structural heart disease with multiple holes in the inner walls and narrowing of important arteries.

Interestingly, the medical team also found baby's liver was left-sided and stomach and heart right-sided. The condition is called as Situs Iversus with Dextrocardia. Besides, ECG showed complete heart block with a rate of 40 beats per minute, which was not compatible with life as a newborn’s normal heart rate between 110 -140 beats per minute. Lower heart rate can reduce output of the heart, resulting in an inadequate blood supply to vital organs. Doctors decided for an urgent pacemaker insertion for saving his life. A medical team under Pediatric Cardiovascular and Thoracic Surgeon Dr. Sajan Koshy successfully implanted the pacemaker in a surgery that lasted an hour. Post surgery, newborn’s heart rate improved to 120 beats per minute. The baby became active and started taking breast feeds from the next day and was discharged from the hospital.

“Congenital heart block is a very rare condition, where babies at birth have low heart rate. In the presence of other structural heart disease, any heart rate of less than 70 per minute needs a pacemaker according to international guide lines. The heart being on the right side was an added technical challenge, said Dr.Sajan Koshy. He added that other problems of the heart need correction in subsequent assessment.

The hospital authorities stated the surgery became successful thanks to the team work of Neonatology team, Pediatric cardiologist and Pediatric cardiovascular and Thoracic Surgeon at the hospital. The child requires further surgery at the age of three months, they added.